Eighty-five percent of the total cost of building ownership is associated with its operation and maintenance. Optimizing the use of space is key to maintaining efficient building budgets and keeping departments properly fit into the spaces they utilize.

The first space types that often come to mind when considering building costs are core productivity spaces such as offices, conference rooms, and break rooms. However, circulation spaces like hallways, walkways, stairs, and open spaces are critical when determining how many departments and people can occupy a floor.

The U.S. General Services Administration (GSA) estimates that circulation space should be 25-40 percent of the total usable space of a floor. With such a broad estimate, complying with this recommendation can completely change floor programming.

With this circulation consideration being a tricky task, how does one properly determine what circulation factor to use? 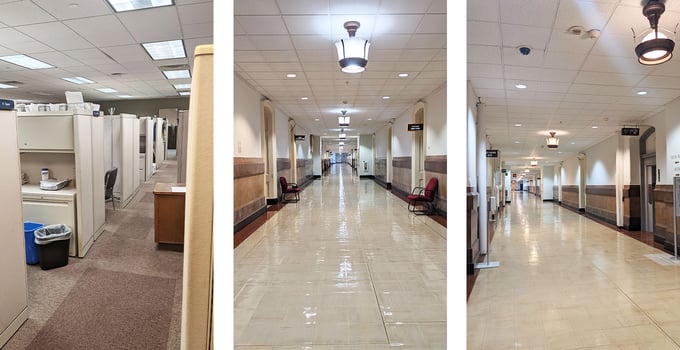 Philadelphia used Cartegraph to examine One Parkway Building and City Hall to determine how
occupancy would impact circulation space.

The City of Philadelphia leveraged Cartegraph's property portfolio software to analyze its circulation space needs on a building-by-building basis. One could apply a standard circulation space factor across its entire real estate portfolio. However, that approach would lead to erroneous information and result in poor use of space.

The city used data based upon its floor plans and square footage to answer a question from the mayor:

The mayor’s ask was reasonable. The city should optimize the occupancy of this newly built, LEED-certified building. Each of those departments shares a similar mission. Space is expensive to operate, maintain, and lease. Philadelphians have an expectation that the Department of Public Property would maximize the value of this facility.

The building’s architects designed the floors as an open floor plan concept with some offices. This resulted in a circulation space percentage of about 43 percent per floor. That percentage of circulation space relative to the total square footage—or to the net usable square footage—meant that those departments could not adequately occupy the vacant floors. The question then became:

What if we redesigned the floor to reduce the circulation space to 25 percent? Can all three departments occupy those vacant floors?

Understanding the interactive and analytical capabilities of Cartegraph, we knew that we could easily calculate circulate space for our buildings. We use Cartegraph’s CAD-to-GIS capabilities to make our buildings “floor-aware” and leverage that floor-awareness to generate capacity, occupancy, density, and related space optimization metrics. We do this through Cartegraph’s interactive mapping dynamically generated space statistics.

The Police Headquarters building is new. We needed information from similar buildings to compare circulation space percentages to this new building to determine if a reduction of circulation space to 25 percent would enable us to fit all three departments on those floors. To be successful, a critical aspect of this task was having our floors and spaces properly classified in Cartegraph. As such, the city put considerable effort into updating and classifying our floorplans to support analyses like this one.

We selected two city-owned buildings for this comparative analysis: City Hall and One Parkway Building. While Philadelphia's City Hall is the largest municipal building in the country, occupancy is much less than that of the One Parkway Building. City Hall is quite old and has long, wide hallways and circulation spaces. We examined these buildings to determine how occupancy may impact circulation space and if those factors could inform our question about having three additional departments occupy the new Police Headquarters building.

This is how we did it all using Cartegraph's property portfolio software:

One Parkway Building is known to be an efficient building from an occupancy perspective. While on the high-end of the GSA range for circulation space, the building is within a reasonable margin of that range. The percentage of circulation space for the vacant floors in the new Police Headquarters is 43 percent and reflects a similar percentage as One Parkway Building.

Additionally, this analysis demonstrated that older buildings, such as City Hall, have a higher percentage of circulation space due to their design and purpose. City Hall is an ornate public building designed to allow for high pedestrian traffic, while One Parkway Building is modern and built for high occupancy rates. Using Cartegraph’s tools was able to give the City of Philadelphia the ability to best understand their circulation and properly fit buildings and floors during major moves.

Disclaimer: The views and opinions expressed in this article are those of the authors and do not necessarily reflect the official policy or position of the City of Philadelphia.